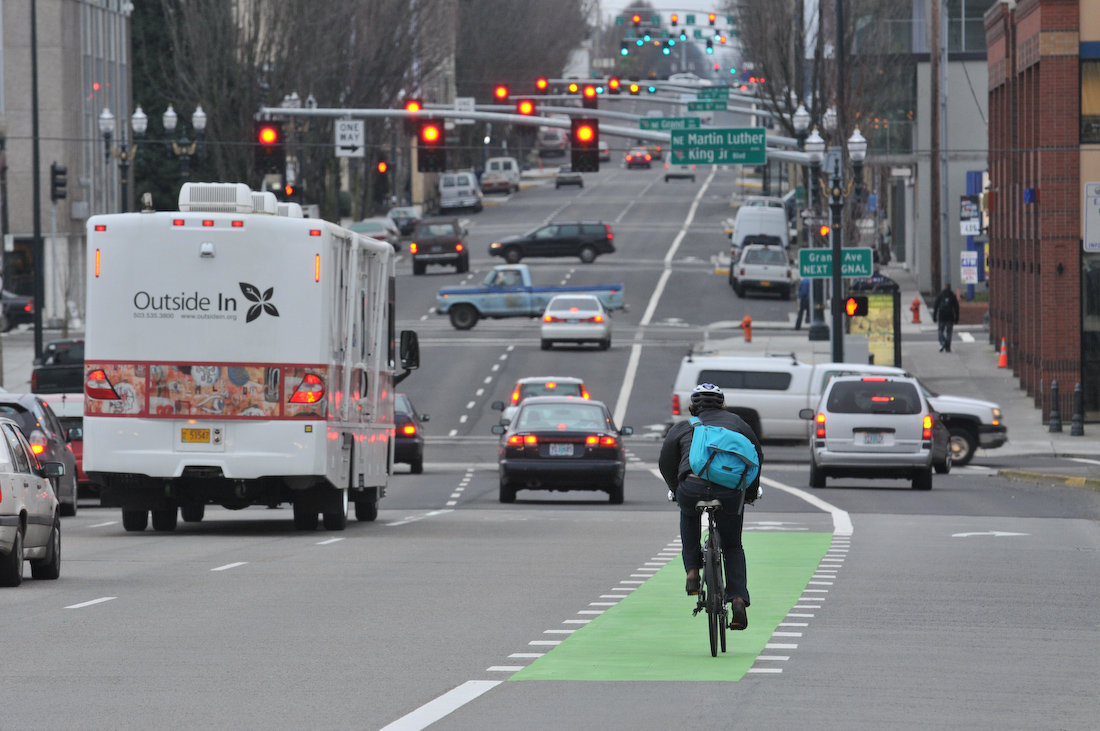 This week, the Portland Bureau of Transportation start work on the East Burnside Rose Lane venture. This venture is a part of PBOT’s Central Metropolis in Movement (CCIM) plan to hurry up transit and enhance infrastructure for individuals biking and strolling.

A Rose Lane on east Burnside is being put in to enhance transit occasions for TriMet bus strains 12, 19, and 20. Its development may also carry some new bike infrastructure that PBOT hopes will make the whole hall extra interesting to new and current riders.

Proper now, there’s a ‘bus solely’ lane on the Burnside Bridge that ends at Martin Luther King Jr. Boulevard. This venture will prolong that bus lane to NE twelfth Ave. As with different bus lane areas, PBOT will contemplate this a “bus and switch” or BAT lane the place drivers are permitted to enter solely to make proper turns. This stretch of Burnside presently has three normal journey lanes (4 simply earlier than twelfth), a motorcycle lane and parking lanes on either side. PBOT will swap the southernmost normal journey lane for the BAT lane.

Between MLK and Grand, PBOT will take away an current curb extension and automotive parking areas to make room for the BAT lane.

A sign improve at MLK and Burnside will create a separate section for buses, bikes, and automotive drivers. It will give bike riders time to cross Burnside and hook up with a brand new bike lane PBOT plans to construct on the east aspect of MLK for one block. The brand new bike lane will take the place of automotive parking. It will likely be the beneficial route for riders touring eastbound from the Burnside Bridge who wish to hook up with the SE Ankeny neighborhood greenway (see plan drawings above). PBOT will add a median diverter to calm site visitors and cut back driving volumes on Ankeny.

It would even be the primary bike lane we’ve ever had on MLK, which is an ODOT-controlled state freeway (99E)! (Proper?)

That is one among a number of CCIM tasks PBOT has been engaged on over the previous couple of months. Individuals biking in internal Portland could have seen latest progress on the SW Broadway bike lane and the SW Alder Rose Lane. Throughout the river and parallel to Burnside there’s the NE Sofa Rose Lane and bike lane extension that PBOT constructed in August proper after the carfree Blumenauer Bridge opened to the general public. There’s additionally the new bike lane on SW Principal Road in between third and 4th Avenues (the ‘Elk Lane’): a small bike connection that ought to strengthen close by CCIM tasks by serving to kind linked central metropolis bikeways.

PBOT says it’s going to take about 12 months to finish this venture. Maintain your eyes peeled for lane closures and development zones.